Thornbury Farm was founded in 1709 with a stone house. The “main house” is the first quarried home in Pennsylvania and was built using the property’s own quarry. On this location, there stood a log cabin that was built in the 1600’s. The original owner was a blacksmith who used the abundant lime stone to make flux in an old lime kiln.

The house has been added to approximately every 80 years. The serpentine addition with its main stair case was used as the first public library in Chester County. In the mid 1800’s, a kitchen was added with a beehive oven. The oven doors still exist and this room eventually became a dining room. Finally, a modern kitchen was added in the 1940’s. 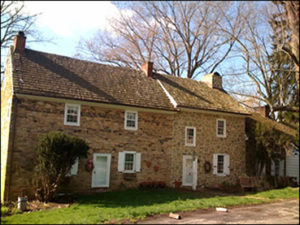 Over the years, other buildings were added including a large stone spring house, a bank barn in 1740 and another farm house in 1812. The 1812 house and the main house were later used as stops on the Underground Railroad. 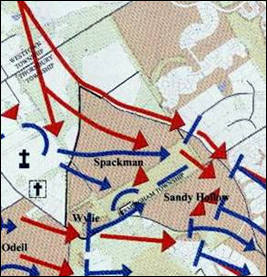 The Farm is the site of the final troop engagement of the Battle of Brandywine, the largest land battle of the American Revolution. It was during this battle that our flag was displayed and fired upon by the British for the first time. All of the generals were visible to each other and each side suffered heavy losses and casualties.

During the battle, soldiers from the Continental Army had run up the farm’s stream to avoid a crushing pincer movement by the German Hessian soldiers. Instead, the Americans became trapped between the Hessians on South New Street and the English on the other side of the stream. So many Americans were shot and bayonneted, it was said the blood flowed over two miles to the Brandywine.

The barn and large deep spring house were used to hold prisoners and the main house was used as a hospital. During the gruesome surgery practices of that time, limbs of hurt soldiers were thrown out the window. Two mass burial sites on the property were used to dispose of the dead. 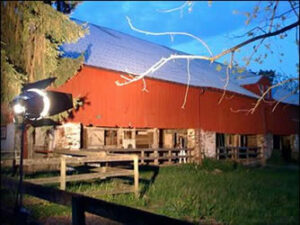 There is so much unrest on the property that Duke University performed para-psychological research in the early 1980’s. Duke used EVP readings and multiple mediums that were spaced 2 hours apart over a 24 hour time period. The mediums did not have any contact with each other and their notes were compared. During their investigation, they learned of 9 separate identities – 8 in the house and one in the spring house. The barn was reviewed and found a little girl looking for her doll near one of the covered wells; a young boy solider atop of the hay mow overlooking the battle, as he had left his post and was afraid.

The house has the ghost of the original owner who hung himself over a now covered hand dug well in the basement. There is also a ghost of a man who froze to death in what was a window well of the earlier building. A soldier blocks the back stair case next to a coffin style door. Also found were a ghost in the master bedroom and a young girl crying in the next room. One old grumpy man was found to haunt the spring house.

Thornbury Farm on the SyFy Channel

In 2009, the farm was investigated by members of The Atlantic Paranormal Society. TAPS had similar findings and the episode aired on the SyFy Channel.

In 2009, Randell Spackman Started Thornbury Farm CSA to grow organic local produce for the community. Now with over 100 members and a public market, it has proven to be a great way to help keep the family farm. The now expanded herb gardens and growth of edible flowers has yielded great produce for local restaurants. Thornbury Farm has held classes on canning, bread making, history, herbs, ghost hunting as well as hosted wine tastings and other events. All of these things help bring Thornbury Farm closer to many people in the community and preserve the great heritage of this 200 acre property.

Come out and see Clover, Daisy, Rue and the rest of the Staff!

Please check out the Philly Magazine video detailing the wonderful Wedding Facility and recent wedding held here at the Farm! Just click the link below…